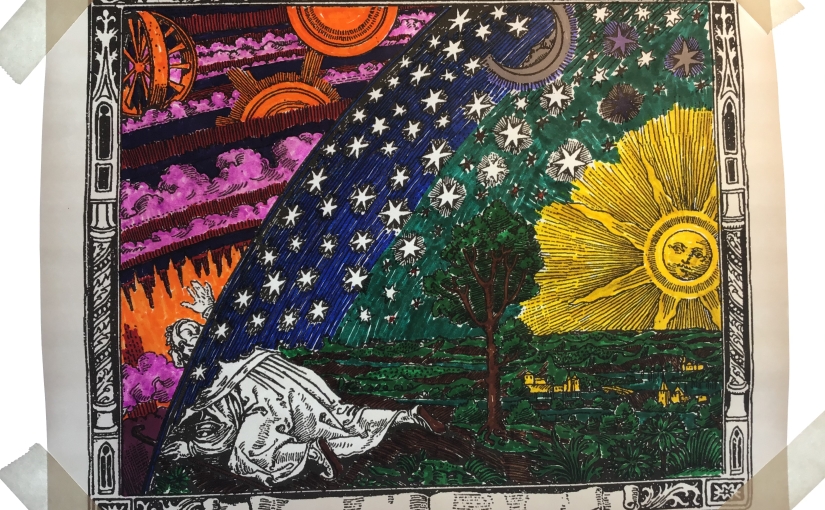 The manuscript is called My New World.  It tells of a life-change.  Change is the universal constant, yet we have a hard time figuring it out.  This manuscript represents a few years of trying to figure it out.

You may remember that I was resuming work on the manuscript after some time rolling the rock up the hill.

I sat down and finished the manuscript in three days.  It’s pretty much done.  A couple of pages need to be redone, and a couple of pictures need to be touched up.  I believe in substantial completion.

I think the next step is to look for a gallery that will show them.  They’re meant to hang on the wall.

These are real-world only artifacts.  They will not be published online.  They contain feelings and photos that have meaning to me and to those who are close to me.

If I am able to schedule a showing, then I will print a catalog of the show, for those who attend and want them.

For the cover I chose an old woodcut from the nineteenth century, Flammarion.  It’s anonymous.  I have always loved it, because it portrays a man taking a look past the edge of this world to a larger world, an unfamiliar world.  It seems to me a Renaissance concept, or Enlightenment.  It also partakes of the spirit of Walt Whitman.  We are creatures, sentient, in a cosmos.

I’m working at coloring it.  The picture here shows my first attempt.  I hope I will do better.

2 thoughts on “My New World”